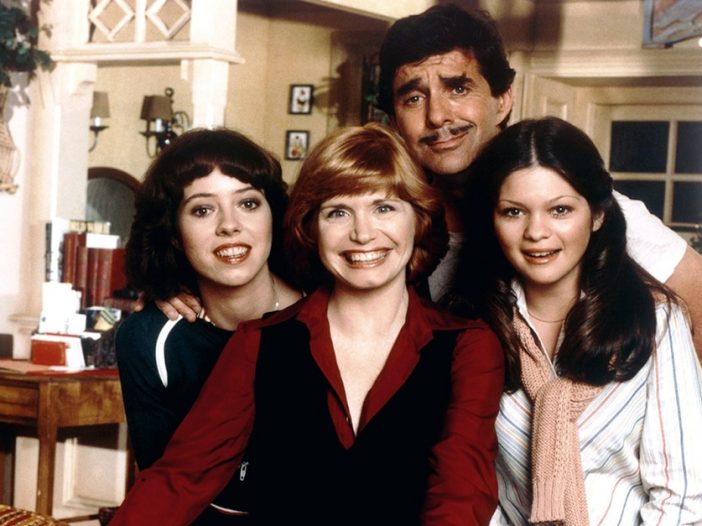 By the time the original One Day at a Time premiered on December 16, 1975, series producer Norman Lear already had All in the Family, Sanford and Son, Maude, Good Times, and The Jeffersons on the air. Already that track record was pretty mind-blowing, and One Day at a Time turned out to be a worthy companion piece.

The show, which was rebooted in recent years with a Latino cast, stars the late Bonnie Franklin as Ann Romano, a divorced mother of two teenage girls who have moved from Logansport, Indiana to Indianapolis. The oldest of the two is the rebellious Julie Cooper, played by Mackenzie Phillips; and the other the more dutiful Barbara Cooper, with Valerie Bertinelli portraying her. The only other regular characters in the cast early on were building super Dwayne Schneider, played by Pat Harrington, Jr.; and Ann’s divorce lawyer turned boyfriend, David Kane, as brought to life by Richard Masur.

Over the course of the show’s nine-season run (with a total of 209 episodes produced), the storylines started out exploring Ann’s struggles to be a good mother while providing her daughters the sort of freedom she never had growing up. From there it explored pretty much every family dynamic and struggle that you could imagine, many of the storylines becoming deeper and more real-world as the show went on.

How the Show Came About

Behind the scenes, during the making of the show, Mackenzie was battling substance abuse problems. As a result, she was a regular for the first five years, was not a part of Season 6, and then appeared on a recurring basis through the last three seasons.

The concept of the show came from actress Whitney Blake — who had spent four seasons playing Dorothy Baxter on the sitcom Hazel in the 1960s — along with her third husband, Allan Mannings, who was working on various Norman Lear shows. She had been inspired by her own experience with her kids, including daughter Meredith Baxter (from her marriage with first husband Tom Baxter).

At the time, Whitney explained to The Los Angeles Times, “This country swarms with divorced women having to be both mother and father to their children. But as far as television is concerned, they don’t exist.”

Concurred Norman, “There hadn’t been a divorced woman on television with children, as surprising as that may seem today. It was a very new idea.” In his Archive of American Television interview, he added, “I had two daughters the age of these daughters and loved the idea, because I knew how these girls would behave, because I was growing up with them.”

One Day at a Time went on to win a pair of Golden Globe Awards in the category of Best Supporting Actress for Valerie Bertinelli in 1981 and 1982, and one for Outstanding Directing in a Comedy series to Alan Rafkin in 1982. In 1984, Pat Harrington won the Primetime Emmy Award for Outstanding Supporting Actor — Comedy Series.

The reboot of the series, starring Justina Machado and Rite Morena, among others, premiered on Netflix in 2017 and ran for three seasons, concluding in 2019. Then it was renewed by Pop, TV Land, and Logo for a fourth and final season.